The Lao National Chamber of Commerce and Industry (LNCCI) and the Ministry of Industry and Commerce have jointly organised the 10th Lao Business Forum on March 28th 2017. The conference, which was chaired by the Prime Minister, H.E. Dr. Thongloun Sisoulith, took place at the Don Chan Palace Hotel. The meeting was attended by representatives from embassies, the government and the private sector as well as from bilateral and multilateral organisations.

After opening remarks by the Prime Minister and by H.E. Mme. Khemmani Pholsena, Minister of Industry and Commerce, Mr. Oudet Souvannavong, president of LNCCI, gave an overview over the progress of the public private dialogue in Laos.

ECCIL and the other foreign chambers participated in the event and gave their particular inputs. This time the Japanese chamber in Laos gave an address about the general business environment, representing the view of the organised foreign business in the PDR.

The lion’s share of the event consisted of presentations of issues and proposed solutions by representatives of private sector working groups. The topics covered areas from taxation to import procedures, from business licensing to access to finance and were underpinned by well-prepared position papers.

The responses from the ministerial representatives reflected a varying degree of openness for the proposals made by the private sector but also a general willingness to discuss open issues.

The Prime Minister emphasised the relevance of transparency and the rule of law for a conducive business environment and the necessity for the Lao PDR to improve significantly its ranking in the Ease of Doing Business Index, which is annually published by the of the World Bank Group and where Laos currently ranks 139th of 190 countries. Ideally Laos should improve its position to a two-digit number in the near future. 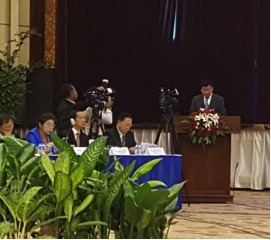