ECCIL, LNCCI and other representatives of the private sector had a ‘round table’ meeting with the UNDP on 13th March 2017 to discuss economic development in the Lao PDR.

The meeting, which took place in UN House in Vientiane, was chaired by the UNDP Administrator, Mrs. Helen Clark, who formerly served as Prime Minister of New Zealand and stayed in Vientiane for several days. ECCIL was represented by its Executive Director, Dr. Ramon Bruesseler. 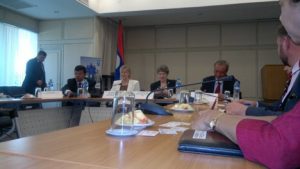