From December 12 to 14th, 2022, the European Business Organization Worldwide Network (EBO WWN) held its bi-annual meeting attended by Executive Directors and representatives of member European Chambers from close to 40 countries outside of the EU in Brussels. Executive Director Thiane Khamvongsa participated to the series of meetings as a representative from ECCIL EuroCham Laos.

The meetings provided members the unique opportunity to meet colleagues from the various European Chambers worldwide as well as listen and engage directly with officials from the EU and European business associations, particularly in areas of potential cooperation in future. The bi-annual meeting aimed to strengthen cooperation, exchange ideas, good practices and experience with other Executive Directors from other European Business Organization worldwide outside of Europe, and to provide the network new insights and as well as a platform for enhanced collaboration, building partnerships and share valuable experience and expertise. 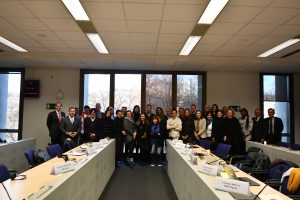 During the first part of the meetings, the EBO’s representatives met several European commission’s Directorate General during the week. This includes the Directorate General for Internal Market, Industry, Entrepreneurship and SMEs that works for an open, seamless and resilient Single Market, with open borders and free flow of goods and services. The different commissions reminded the EBO’s of priorities of the EU commission: collaboration without creating dependency, accompanying the green transition and cooperation with private sector within the framework of Team Europe, and encourage the EBO’s to solicit support and partnership through identifying projects common projects.

Presentations by the Green & Circular Economy department from DG GROW were made to the EBO’s on EU’s projects of clusters in the local, regional, and national level and work on strengthening the industrial ecosystem of regions with a focus on Matchmaking Events and encouraged EBO’s to team up with other cluster organizations from Europe and third countries and find new collaboration opportunities at dedicated matchmaking events.

A meeting was also held with Business Europe, the leading advocate for growth and competitiveness at European level, standing up for companies across the continent and campaigning on the issues that most influence their performance. A recognized social partner, Business Europe speaks for all-sized enterprises in 35 European countries whose national business federations are our direct members and is headquartered in Brussels at the heart of the EU institutions. They work on behalf of their members to ensure that the voice of business is heard in European policymaking and interact regularly with the European Parliament, Commission and Council as well as other stakeholders in the policy community.

During the 2nd part of the meetings, the EBO focused on their own clusters with each region holding a coordination meeting, and with sharing sessions between EBO’s, namely a Best Practice Workshop on Advocacy where:

An EBO Best Practice Workshop on Financial Sustainability was also organized where: 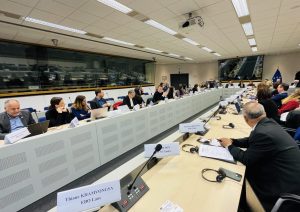 The EBOWWN ASEAN cluster also met with the EU ASEAN Business Council represented by ED Chris Humphrey, who were in Brussel for the EU ASEAN Summit. All ASEAN EuroCham are members of EU-ABC, and this was the occasion of reminding several agreements such as : when doing business summit in countries, EU-ABC have to go through local EuroCham (although, same as the EU delegation, EU-ABC cannot pay EUroCham’s for its services). EU-ABC also reminded that EuroChams ASEAN also have 3 board member positions who have 3 years mandate, and they are currently hold by Cambodia, Malaysia and Indonesia. EU-ABC counts 50 members (to be member of the council, companies have to be members of 2 Chambers) and 9 Chambers. EU-ABC collaborate closely with Philippines and Indonesia, but much less with the other 7 chambers. ASEAN EBO’s and EU-ABC discussed how both organizations could better communicate and identify areas of cooperation and voted to implement regular Zoom meeting with all ED’s, every 2 months with a start on the 3rd week of January by Zoom, and to try to plan one in person meeting in September 2023, probably in Indonesia where the EU-ABC summit will be held this year.  ASEAN EBO’s raised that EBO’s wished to be involved and collaborate on events like ASEAN-EU business summit and work on aligning the timing and agenda, collaboration with relevant EBO for EU-ABC Business missions with shared plans for upcoming publications, missions, events, flagship event.

Eventually on the last day of meeting, the EBO WWN organization also finalized its board composition with 7 board members, including a Chair, a Vice-President, a secretary and several board members each with an area to develop such as: structure of the organization, advocacy, white paper, communication, organization in regional clusters with regional coordinators, joint surveys, joint software, stakeholder discussion, best practices, financial sustainability, and stakeholder management. The secretary reminded of the annual fees for Chamber to be part of EBO’s which are 200 Euros per year. ECCIl EuroCham currently owes the membership fees for 2022 and 2023 and will pay both in January 2023. The EBO’s also agreed on the following meeting schedule for the year to come: