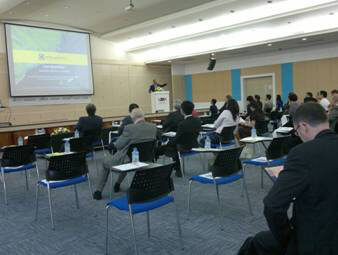 The LSX was opened earlier this year and has two companies listed so far. However, by the year 2015 it is planned to have at least 15 companies listed. The next candidate to be listed is likely to be ETL which is supposed to have their IPO at November 11th this year. 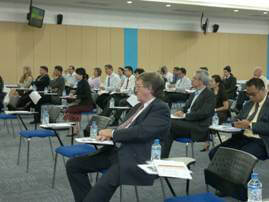 The Event started with an overview owner LSX given by Mr. Hoejong Park, Vice Chairman and Chief Operating Officer of LSX, followed by a presentation by Mr. William Greenlee, Managing Director of DFDL Mekong in Laos. Mr. Greenlee, who was supported by his colleague, Mr. Jack Sheehan, elaborated about stock markets in general and about the conditions for ling listed at LSX as well as about the necessary procedure for on IPO. After a wrap-up by Mr. Alistair Maclean, president of ANZBA, the participants were invited to a guided tour through the LSX Building.

The meeting ended with a luncheon.